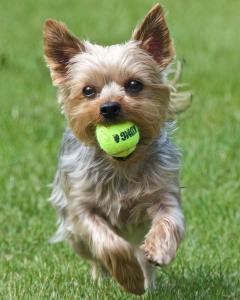 If you’ve ever watched a dog show (televised or in-person), you’ve probably seen agility and obedience competitions. But that barely skims the surface of the world of competitive dog sports. There are so many games you can learn with your dog. Competing in dog sports helps strengthen the relationship between you and your pup and gives your dog something constructive to focus on. As you know, a dog at work is a happy dog. Canine sports will wear your pup out and make them far less likely to participate in destructive behaviors. Here are some dog sports you may not know about:

Scentwork
Also known as nosework, scentwork uses the same techniques employed by professional scent dogs (ie – drug dogs or explosive detection dogs). Several organizations host scentwork competitions, but the overall concept is the same with each one: dogs use their nose to hunt down specific smells. The odors are spread across interiors, exteriors, vehicles, and containers. The dog is given a certain amount of time to sniff out these odors and alert their handler as to when they’ve located them. Typically, the competition uses unique scents, such as clove, anise, and birch.

Rally
Rally obedience, also known as Rally-O, is an obedience based obstacle course. Think of it as a blend between traditional obedience training and agility. The course consists of a series of signs with directions to complete a specific skill. The skills might be left or right turns, sits, cone-weaving, or even jumps at higher levels. The dog approaches each station off-leash and completes the skill before proceeding to the next station. This is an AKC certified sport with levels spanning from Novice, Advanced, Excellent and Masters.

Flyball
Did you ever compete in track or field? Flyball is the dog version. Like a good game of fetch with hurdles thrown in for good measure, flyball is a sport in which a dog sprints down a track, jumping over hurdles as they go. When they reach the end of the track, a flyball box dispenses a tennis ball. The dog grabs the ball and races back to the other end of the track, jumping the hurdles once again. This is a team sport, in which dogs are placed in groups of four, so it also has a relay aspect. As each dog completes the track, the next dog is given the green light. Parallel tracks are used to race two teams at a time. 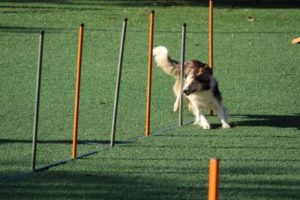 Dock Diving
Dock diving is probably the simplest canine sport on this list. If your dog enjoys swimming and fetch, this might be right up their alley. In essence, the dog waits for your command on a forty-foot long dock. You throw his favorite toy into a pool at the end of the dock. When given your signal, your dog will then run to the end of the dock, leap into the pool, and grab his toy. Points are awarded for the length of the jump. The dog who jumps the greatest distance wins.

Skijoring
If you live in a cold climate and your dog enjoys the snow, you might consider taking up skijoring. Derived from the Norwegian word meaning “ski driving”, skijoring is a winter sport in which your dog pulls you through the snow on skis. It’s similar to dogsledding, but with less equipment. Plus, it can be done with one to three dogs rather than a full team. All you need are a good set of skis and a quality harness. For safety reasons, this sport is only recommended for dogs over 35 lbs that could realistically drag their human handler’s weight.

Just like any sport, your dog will need to learn the basics and train before they can participate in any of these on a competitive level. A simple Google search will help you find local chapters and dog training facilities near you. Your dog’s interest in these sports will vary based on their physique and personality. The bottom line: you and your dog should be having fun, no matter which canine sport you pick.