HOW TO DEAL WITH JEALOUSY BETWEEN DOGS 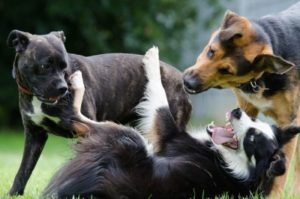 Dogs have a lot of the same emotions as their human counterparts, and jealousy is no exception. Your dog may be jealous of another pet in the household or even your spouse. Over time, jealousy will disrupt the harmony and social structure of your household, so it’s important to address it before it becomes a problem. Here are a couple of ways to deal with jealousy between dogs and how to recognize it when you see it.

Introduce them properly.
If you’re bringing a new dog into the household, chances are, your other dog is used to their “single child” status. It will take some getting used to for them to share your attention with another dog. You can relieve this tension by making sure you give balanced affection to both. It can be tempting, especially with a new puppy, to lavish attention over your new dog. However, if you can keep things as close to routine as possible for your resident dog, they’ll have an easier time adapting to an addition to their pack. The same goes for a new human roommate.

Additionally, introduce your dogs on neutral ground. Ideally, introduce them outside before you ever bring your new addition into the home. Why? Because your resident dog sees your home as his domain. In all likelihood, he won’t be too keen on some other dog invading his territory before he’s had a chance to sniff things out for himself first.

Feed them together.
Food aggression is a common issue with some dogs, and it can be aggravated even further when introducing a new pet. To alleviate this, feed your dogs at the same time without allowing them to face one another. That way, there is no preferential treatment involved, they’re both getting their meals at the same time, and you’ll lessen displays of dominance by eliminating eye contact.

Train them to associate the newcomer with good things.
Naturally, your resident dog sees other dogs or pets as competition for your attention. Help shift their perspective by showing them that the newcomer means good things. You can start out by giving your resident dog treats every time the newcomer is around. Or perhaps you only play fetch when both dogs are involved. Eventually, your dog will learn that the best activities and rewards are paired with the newcomer. With time, your dog will come to really bond with the other dog because he knows that the other dog equates to fun activities and tasty rewards.

When your two dogs are playing nicely together, praise them. You’ll probably see a natural hierarchy form between the two, in which one dog is more dominant than the other. Any time you see the dominant dog respect the submissive dog’s subtle hints to back off, reward them. Once they understand that playing together harmoniously comes with praise and rewards, they’ll do it more often. 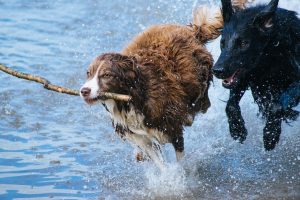 Be mindful of puppy energy.
There may be a large age difference between your resident dog and a new dog. If you’re bringing home a puppy and already have a mature dog, keep in mind that your puppy has that boundless puppy energy while your older dog might not. Puppy energy can be annoying and tiresome to adult dogs. Be sure your older dog has the means to escape the pestering of its new companion. This might mean creating a barrier (such as a baby gate) or occasionally crating your puppy to give your resident dog its space. Allow each dog to have its own bed so they have somewhere private to go when they need time apart.

If your puppy is exiled to a crate or behind a baby gate, it’s important that you don’t frame this as punishment, or more problems are bound to follow. Give them a treat or chew to work on while spending time in their own private space. This helps manage the environment and keeps both parties happy and healthy.

For more tips and tricks for your pup, you can check Ruffger’s articles for dogs