If you have an excitable dog, it can be challenging to introduce it to new people. Most people don’t love it when a dog jumps on them, especially a larger dog. (This might be cute when they’re a puppy – less so when they’re full grown and 60+ pounds!) Some dogs may even relieve themselves a bit when meeting strangers due to the excitement. Teaching your dog to politely greet a stranger instills good manners and obedience. It not only helps your dog build a sense of self control, but makes them much more pleasant to interact with. Here’s how you can train your dog to calmly greet a stranger in just a few simple steps.

Don’t make a show of coming and going. 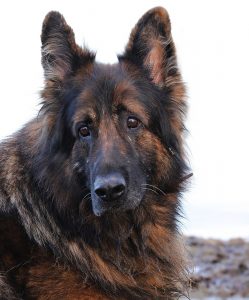 The first step starts with you. Do you fawn over your dog every time you leave? Do you raise your voice in cheery excitement when you come home? If so, you’ve been unknowingly training your dog to view your entrance as an exciting event. It may be tough, but to untrain this behavior, you’ll have to start ignoring your dog when you come home until they’ve calmed down. Eventually, they’ll learn that it isn’t a big deal when you leave or come home. As an added bonus, this helps rectify separation anxiety as well.

Squatting down might not be the answer.
Have you ever noticed that most people’s instinct is to squat down to pet your dog? Sure, this puts them closer to their level, so you might think it’ll prevent your dog from jumping. However, dogs like to lick faces and ears when they’re excited. This is an instinct bred down from wolf cubs. If the person greeting your dog doesn’t want a faceful of licks, they may lean back or stand up in response, prompting your dog to jump to reach them.

Train your dog to sit when greeting people.
The better answer is to reward your dog for sitting each time they greet someone. Do not allow a stranger to approach him until all four paws are on the floor. If your dog can’t settle down and sit, walk away from the stranger until calm is restored and try again rather than pulling at his leash and shouting commands at him. You may have to speak up and instruct others against greeting your dog until he’s followed your commands. If your dog responds well to treats, treat him every time he’s able to successfully sit as a person approaches.

Turn jumping into a command.
Inevitably, there’s always one friend or family member who seems to love having Fido jump on them. It’s confusing to your pooch that there may be circumstances in which they’re allowed to jump on some strangers, but not others. To remedy this, pair the act of jumping with a trainable command. You can use the word “hugs” , for example. If you decide to go this route, it’s critical that you ONLY reward the behavior when it’s done on cue.

Tire your dog out before greeting others.
If you anticipate having a group of friends over and you’re worried about how your dog will behave, tire them out first. A tired dog is a calm dog. Prior to greeting others, take them on a long walk or fetching session. With the added exercise, they won’t have the same boundless energy and will be less likely to jump up on others. 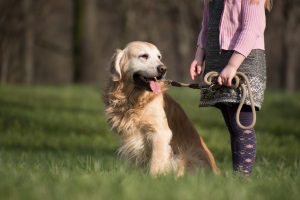 As always, reward the behavior you want to see and avoid negative reinforcement. With time, your dog will come to see calm, collected greetings as the default. It’s all about taking control of your dog’s behavior. If all else fails, contact a professional. Local dog training facilities can give you the tools you need to train your dog and correct any unwanted behavior.